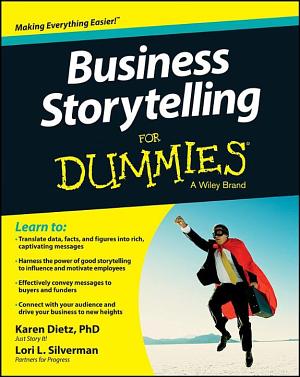 At the opposite end of this humane tradition is “Death by PowerPoint.” This critique of the slide-based software, so named by Angela Garber, argues that PPT decks are often boring, oversimplified, needlessly stylized, overly complex – or all of the above.

Somewhere in the middle, perhaps, is ordinary business communication, instructional materials and well-tolerated military briefings. After all, David Byrne has shown in his PowerPoint-based art that the software medium itself may not be at fault.

So it is with PowerPoint in mind that I supposed that Dietz and Silverman’s Business Storytelling Business might be a useful mate (or antidote) to the book used for reference when the Microsoft PPT help screens fall short. Business Storytelling is written in a breezy style that belies the importance of this topic. Nonetheless, Dietz and Silverman have crafted a book that satisfied my goal.

I only own two “Dummies” texts, and the other one was printed in 1999, but the brand’s format hasn’t changed much despite the transition to Wiley. The text is strongly edited, by which I mean it follows a somewhat principled structure and doesn’t stray from its pragmatic intention for long.

A Must-Have for PowerPoint Mavens and TED Talk Wannabes

A psychological / linguistic term for storytelling is Narratology: “the branch of knowledge or literary criticism that deals with the structure and function of narrative and its themes, conventions, and symbols.” Business Storytelling doesn’t cover narratology in depth  (and fails to mention Roger Schank). While there are relevant and useful peer-reviewed references, they’re sprinkled throughout the text and interspersed with blog posts, anecdotes, books (e.g., Nancy Duarte’s Resonate: Present Visual Stories that Transform Audiences) and case studies. This is not a failing given the book’s stated audience and objectives, but the suggestions made would have been strengthened by an academic-style bibliography.

Offsetting this lack are numerous story examples – both good and bad – which illustrate the authors’ recommendations. Here are a few that may demonstrate the flavor of the book:

The book uses cartoon-style iconography for tips, pitfalls, realistic examples, external references, points to remember. Some may find this style off-putting, but if you can get past the idiomatic style, it does improve skim speed, which is what’s needed to rework and groom a story – and a PPT deck. Refer to additional worthwhile content at the book’s web site.

The business of creating business stories is non-trivial. Some of the unpersuasive examples provided in the book make this clear. Good storytelling calls for multiple talents: creativity, engaging diction, a balance of the simple and the complex, good aesthetic sense, practice, a sort of storytelling erudition – and, above all, metacognition of the domain that extends beyond the vanishing point of the story. Good storytellers may do all this instinctively, but, as a good fiction writer will readily attest, a cookbook will not result in a PowerPoint rose as lovely as Faulkner’s “Rose for Emily.”

You can see a TEDx talk by Dietz in which she introduces some of these concepts.